U.S. and China face off in Iranian conflict 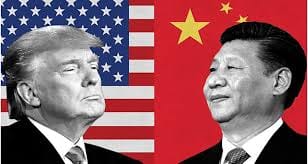 U.S. and China face off in Iranian conflict

China?s relationship with Iran is being put to the test after US president Trump slammed sanctions on Chinese state-run energy company Zhuhai Zhenrong for allegedly violating restrictions imposed on Iran?s oil sector.

U.S. Secretary of State Mike Pompeo stated that the sanctions were put in place as the company engaged in the sale and delivery of Iranian oil without a waiver provided by Washington. This action can be seen as another step in Trump?s sanctions agenda to bring the regime on its knees. The crisis between Iran and Washington is heating up, but will also involve China as the Asian giant is still Iran?s largest oil importer. Trump seems to be willing not only to take risks in the Persian Gulf but to also take a stance in the ongoing Chinese-US trade war.

As Pompeo reported, Chinese energy company Zhuhai Zhenrong ?knowingly engaged in a significant transaction for the purchase or acquisition of crude oil from Iran? after the expiration of a US sanctions waiver covering China on May 2.? Current sanctions put on the Chinese entity are a block of all property and interests in property of Zhuhai Zhenrong in the United States and barring its CEO Youmin Li from entry into the country.

The Chinese reaction was as expected. The Chinese embassy in Washington has rejected the US sanctions. It also rejects the so-called ?long-arm jurisdiction? on China and other countries invoking its domestic law?.? Remarkably enough, it seems that the Chinese entity has been known for its Iranian conflict approach, as the Obama Administration already sanctioned it back in 2012 over its oil deals with Iran. Even though it acts as a commercial independent entity, the company is a subsidiary since 2015 of Macau-based, state-controlled conglomerate Nam Kwong Group. This group, however, claimed that the company was spun off September 30, 2018. The Trump Administration action needs to be seen as a sign to parties that Washington has taken a hard line on Iranian sanctions implementation.? It can be expected that Washington has taken aim at the Chinese entity, which is relatively small, as a direct open threat to others, such as Russian companies, emitting a clear signal that the world has changed.

Another possible reason for the current harsh implementation of sanctions is that there are a growing amount of indications that Iran is still able to export substantial crude oil volumes to Asia. Reports indicate that a multimillion Iranian crude oil storage is being set up in China, just waiting to hit the market whenever appropriate. There are also signals that Washington is warning its allies to get behind its Iran policy. On July 28 Britain, France, Germany, Russia and China will meet Iran in Vienna to discuss how to save the 2015 nuclear deal. The EU’s foreign policy service stated that the meeting has been convened at the request of France, Germany, the United Kingdom, and Iran, and will examine issues linked to the implementation of the JCPOA in all its aspects

The possible US-China disagreement on Iran is not to be taken too lightly. At present, China is one of the only staunch supporters of the Tehran regime. In June China and Iran conducted a joint naval exercise near the ?strategic Strait of Hormuz in the Persian Gulf. A Chinese flotilla of two ?Chinese destroyers, a logistics ship and one helicopter, exercised with the Iranian navy. After the exercise the Chinese headed to Oman. The Iranian navy assigned its Alborz destroyer, a helicopter and about 700 personnel to the exercise. For China the Persian Gulf is of the utmost importance, and Iran is playing a major role in its crude oil supply strategy. In a possible Iran, US/UK confrontation, the role of China should be taken into account.

Beijing has increased its cooperation with Iran and the Arab Gulf States over the last couple of years, as shown this week by a new deal between ADNOC (UAE) and CNOOC. Beijing also supports Tehran?s bid to join the Shanghai Cooperation Organization ? a security bloc consisting of China, Pakistan, ?India and Central Asian nations that is widely seen as a counterweight to NATO. Chinese sources have already stated that China is poised to increase its military presence in the Middle East to support its ?Belt and Road Initiative? and would interfere more in the affairs of the region. Current Chinese neutrality, if even applicable, is still key to stability in the region. Trump?s willingness to risk this shows the volatility of the current situation. Actions against Iran will involve possible Chinese companies and armed forces in the area.

For the global oil market, Washington?s current approach could be a major upward price push. By showing Washington?s willingness to sanction Asian buyers of Iranian oil, a possible resurgence of Iran?s oil industry becomes even more unlikely. Even the millions of Iranian crude oil barrels stored in China and other places are not out of reach to an US president willing to act as he speaks.