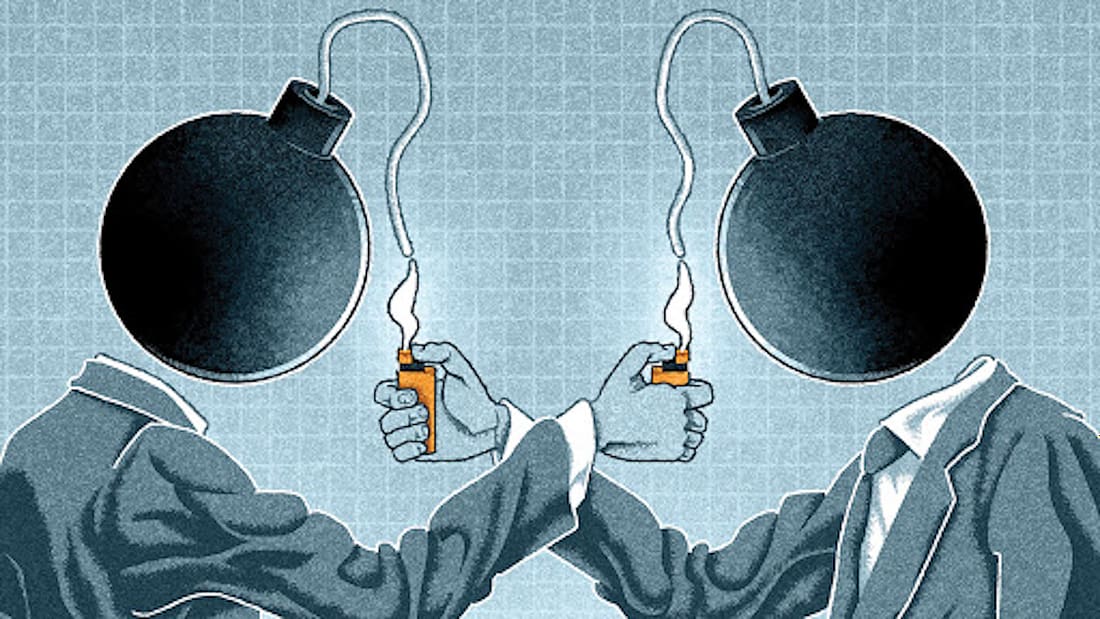 ?Two boys are in a closed garage with several inches of gasoline on the floor. One has six large matches, the other has seven smaller ones. They debate as to who is strategically superior?.? J.K. Galbraith

The world?s oil markets are at a crisis point arguably not seen in its history.

Since the last meeting of OPEC/OPEC+ concluded, global oil prices have collapsed to close Friday at 53.14% down for WTI and 51.14% down for Brent. These prices are the lowest seen in almost twenty years. Oil prices have tumbled as the fallout of that meeting compounded the unprecedented hit to consumption from the coronavirus pandemic.

As we remember all too well, Russian Energy Minister Alexander Novak told reporters leaving the meetings in Vienna that without reaching an agreement on production, members could now pump what they liked starting April 1st. Taking this as a declaration of war, Saudi Arabia has since raised the stakes with its plan to flood the global oil market with increased oil volumes.

With global oil demand curtailed by an estimated twenty million barrels per day due to the coronavirus led shutdown in the world?s economy, the oil war would turn an already dire economic outlook for global energy demand into a catastrophe that could change the energy landscape forever. An increasing number of producers are now losing money on production, wells are being shut-in and in certain areas (e.g. Canada) the oil industry may never recover ? a generational destruction of personal livelihoods and the end of a reliable source of national wealth and revenue.

Yes, the economic crisis caused by the coronavirus has severely affected the global oil markets but, the actions of the participants in reaction to this crisis have shown an industry in the grips of a mass suicide.

The question has to be asked, in starting an oil war during a global pandemic that has already seen demand fall by twenty million barrels per day in a matter of weeks, have we all forgotten about the theory of Mutually Assured Destruction?

In 1962, the concept of Mutually Assured Destruction started to play a major part in the defence policy of the United States. President Kennedy?s Secretary of Defence, Robert McNamara, set out in a speech to the American Bar Foundation in Chicago, Illinois, the beginnings of the US policy on nuclear deterrence, that would remain US policy throughout the Cold War.

Thus, the true philosophy of nuclear deterrence became to be established. If the other side knew that by initiating a nuclear strike it would lead to a response that would be so massive that they would inevitably suffer ?assured destruction?, they would be irrational to press the button.

In the past, wars had been fought by defeating your opponent on the battlefield by superior use of force. But MAD was a radical departure that trumped the conventional view of war. As governments around the world have worked to quickly commit trillions upon trillions of dollars to shore up the global economy, efforts have been short-lived as more and more of the global economy succumbs to the coronavirus led shutdown.

Yet, in what can only be described as a strict adherence to the theory behind MAD, Russia, Saudi Arabia and others have given no signal that they are slowing down in their attempts to flood the world with oil and grab market share at the expense of each other. Saudi Arabia has also turned OPEC into a ?you?re on your own now? proposition. While Saudi Arabia, with arguably the lowest cost of production and deepest pockets in OPEC, will offset some of the collapse in oil prices with the boost in volumes, almost all of its fellow OPEC members are much less fortunate. 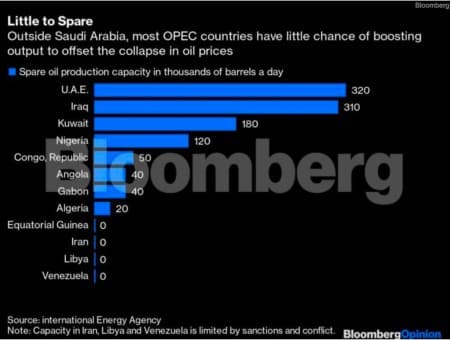 It is clear, that with the enormity of the current (and projected) overhang in global oil supply, only a globally co-ordinated attempt that includes all major producers, would help address this attempt at energy market MAD.

It is also clear that any co-ordinated attempt would have to include the United States.

Whilst Trump believes that lower oil prices is a positive message for domestic US voters, members of the US Administration have started to appreciate the dangers posed to the US energy industry and the theory of ?energy independence?. Only last week the US began the public pressuring of Saudi Arabia. The State Department reported on Wednesday that Secretary of State Pompeo in a call with Mohammed Bin Salman ?stressed that as a leader of the G20 and an important energy leader, Saudi Arabia has a real opportunity to rise to the occasion and reassure global energy and financial markets when the world faces uncertainty?.

As often the case since 2017, the US is looking for others to do the ?heavy lifting? when it comes to the supporting of the global energy market. OPEC and OPEC+ have legitimate gripes that their support of the global oil price through production cuts has directly led to continuance the US shale industry?s exponential production growth.

US shale production has grown to such an extent that it has helped the US eclipse both Russia and Saudi Arabia in becoming the world?s largest oil producer. This has been trumpeted by the US President as the US achieving energy independence.

To the often-made complaints by OPEC and OPEC+, the US has always cited ?free market? forces. How ironic now that there are calls by domestic US shale producers for tariffs, duties and even limits on foreign oil to provide an ?artificial? oil price floor.

Saudi Arabia?s position is that only a collective effort by all producing nations to put in place significant output cuts, rather than unilateral cuts by Saudi Arabia, can address the oil price destruction.

No doubt there have been many ?behind-the-scenes? discussions between all major oil market participants to address the obvious problems. But, to this date all calls have gone unheeded and all participants seem to be hell bent on the path to energy market Armageddon.

Eight months after Robert McNamara?s speech, the Cuban Missile Crisis was in full swing. Thankfully, after a number of crisis flashpoints, we know that the participants reached a solution that backed away from the mutually assured destruction that seemed destined at the time.

As we approach the 1st of April, we are at an energy market crisis point, where oil producers are free to produce and sell as much oil as they like. Saudi Arabia has talked of offering 12.3 million barrels per day to the market. We do know that Saudi Aramco has never before produced those amounts of oil (even at full production) thus implying that it will draw down crude stored at home and in tanks in Japan, the Netherlands and on Egypt?s Mediterranean coast. If true, it will signal to the market its strength of commitment to the destruction of the theory of oil market balance.

Even then it may be that no matter what the price, there isn?t enough of a market (or storage capacity) to absorb all the barrels purportedly on offer. Refineries have started to close, even in the US and analysts at Rystad Energy estimate that the world is likely to run out of storage at current production rates by April, estimating that 76% of the world?s storage is already full. In some regions, like Western Canada, where Western Canada Select is trading sub-$5 storage could be full by the end of this month ? that is tomorrow. IHS Markit forecasts that by the end of June 2020, surplus oil will have already reached 1.8 billion barrels, exceeding their estimate of current available storage of just 1.6 billion barrels.

In seemingly echoing the course of events of October 1962, when the world seemed on the inescapable path to nuclear Armageddon, it seems that all participants are staring into the abyss ready to jump and the global oil market is spinning out of control.

But, looking back to the lessons learned from October 1962, there is a small window of opportunity for the ?combatants? to come together in a co-ordinated effort to share the responsibility of reassuring the global market and pull back from the brink of energy market Armageddon.

If this does not happen the world will be entitled to exclaim ?the global energy markets really have gone MAD?.

by Mitchell McGeorge as published in Oilprice.com under the heading “Oil markets are on the brink of Armageddon”.