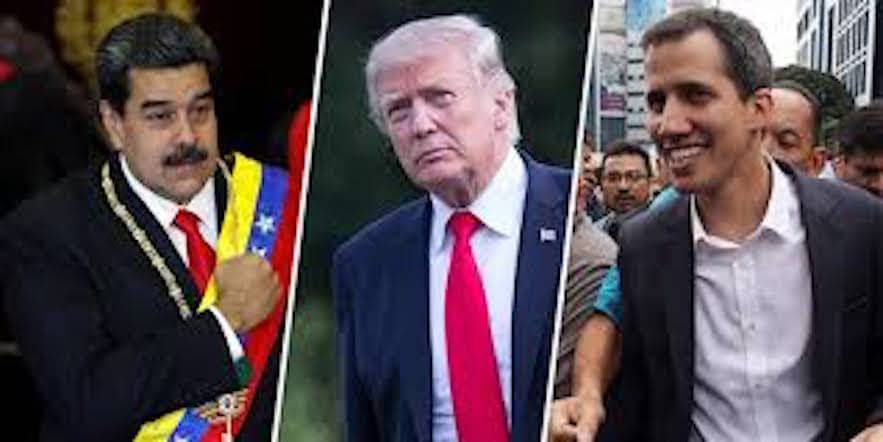 With the current oil price war raging across the globe, the heavyweights of Saudi Arabia, Russia and UAE have been offering significant volumes and discounts into the market, crushing the spot oil price from levels seen as recently as only a month or so ago.

Whilst global oil heavyweights struggle to grapple with effects and fall out of a 50% decline in oil prices, the biggest risks are to countries where oil revenue makes up the majority of national income ? countries such as Libya, Angola, Nigeria, brazil, Iran and especially Venezuela.

Prior to the current oil price war, PDVSA had been offering benchmark Merey Crude at discounts of between $16 to $18 per barrel to Brent as a way of enticing buyers to run the risk of breaking the US sanctions. Relatively stable (and higher) oil prices meant that this discounted Merey Crude compared favourably in costs against local competitors Mexico?s Maya and Columbia?s Vasconia, whilst still leaving some income available to the Maduro regime.

From a country that should be wealthy beyond its imagination, with arguably the largest proven oil reserves of ~303 billion barrels of oil in place (as at 2018 ? albeit most is heavy or ultra-heavy, with higher associated costs and requiring blending for market), we have seen the catastrophic mismanagement of Venezuelan oil wealth, firstly by Hugo Chavez and now by Nicolas Maduro where criminality, lawlessness and the black market have run rampant. ?The nationalisation and mismanagement of PDVSA also been a contributing material factor, with the company seeing the vast majority of its skilled and experienced personnel forced to leave.

With rampant inflation comes the destruction of the value of money and a destruction of the living standards of the general population ? which has led to civil unrest, mass protests, imposition of US economic sanctions and an attempted overthrow of the Maduro Government. Now, the billions of dollars that have since been promised to various parties to secure and keep power will now vanish through the now deeply discounted oil revenues.

A cursory glance at the headline numbers prior to the recent oil price war will show us the catastrophic effects on Venezuela of the US sanctions which, during a period of relatively buoyant and stable oil prices, has still led to dramatically reduced production and slowed national income to a trickle (between 95% and 99% of all export income is earned by oil which accounts for up to 70% of all Government revenue). 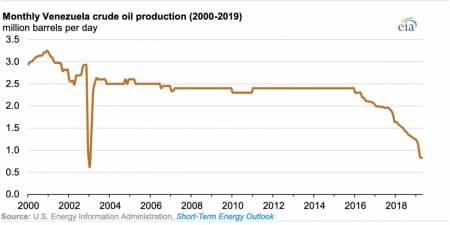 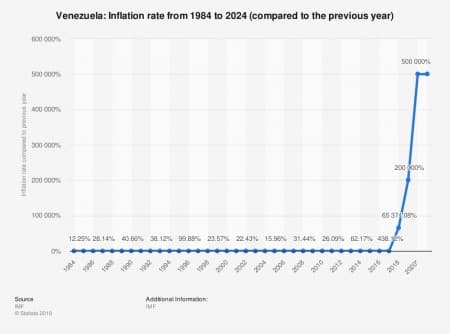 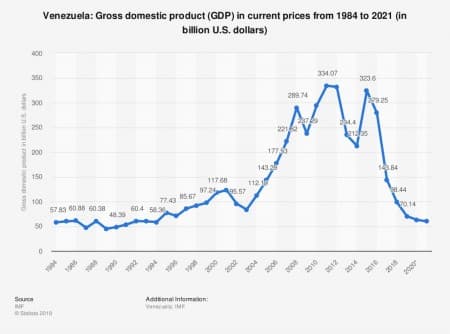 National Debt as percentage of GDP 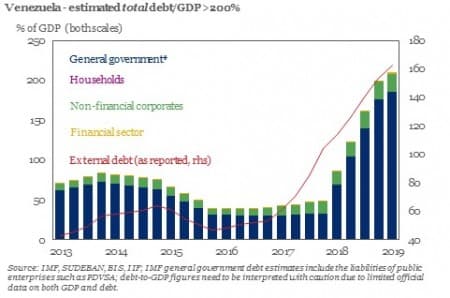 But, with Brent crude falling to the low $30, Venezuela has been forced to slash prices further to entice embargo busting clients with discounts of up to $23 per barrel on Merey Crude this week.

These new prices for Merey Crude leave an already dire positioned PDVSA struggling just to cover operating costs. With Brent Crude at $35 per barrel, these new discounts put Merey Crude into the marketplace at ~$12 per barrel. With production costs averaging between $10 and $12 per barrel, excluding the reported 33% royalty that PDVSA pays to the Government, PDVSA will be significantly underwater.

Venezuela, like Iran, are solely oil-based economies which has meant that the US trade sanctions has reduced critical export earnings to a mere trickle. As is the point of the US game-plan, sanctions have seen Venezuela?s daily production levels fall to 865,000 barrels per day in February as oil sales fell to a 34-year low.

This is severely restricting Venezuela?s ability to fund vital services and security ? weakening the already tenuous hold of Maduro on power ? when taking this week?s pricing of Merey Crude into consideration ? there will be no income left for Maduro to keep the government workers and armed forces on his side.

A further complication is that one lifeline of support has been Russia who, through state-owned Rosneft, had provided PDVSA with $6.5 billion in loans in exchange for crude deliveries. As of the 3rd quarter 2019, there was approximately $800 million left owing according to Rosneft. Not only was Rosneft providing vital financial support, it was handling over half of the oil coming from Venezuela and taking it to market.

On February 19, the US tightened the screws further by imposing further sanctions on Rosneft PJSC for maintaining ties with the Maduro regime and PDVSA. Rosneft was already subject to some US market-sector sanctions ? although not as far reaching. According to US officials, Rosneft had been avoiding sanctions by using ship-to-ship transfer to obtain Venezuelan oil.

TNK Trading International, the Swiss subsidiary of Rosneft, was sanctioned on Thursday (12th March) after cargoes of Venezuelan crude allocated to Rosneft were changed to TNK to avoid sanctions. TNK had purchased 14m barrels of PDVSA crude in January. Whilst Rosneft maintains that there is no illegality in its relationship with Venezuela, those engaging in transactions with Rosneft (and its subsidiaries seen engaging in illegal behaviour) would run the very real risk of worldwide sanctions by the US as well.

To this end, Reuters has reported that an increasingly desperate Venezuela has been forced to enter into oil-for-food deals. With production decimated, oil sales at a 34-year low and sanction screws being tightened, there has been limited income from oil receipts to fund basic necessities. Venezuela entered into a deal with Mexico?s Libre Abodoro SA ? swapping over 7.2m barrels of heavily discounted crude for desperately needed deliveries of corn and water trucks since December, with another 2.4m barrels to load this month.

But, with the current discounted price settings for Venezuelan crude, this economic and social lifeline is also being threatened. With the collapse of the oil price, and with it the resultant oil revenues, Russia may not be wiling (or able) to keep Maduro afloat whilst also facing economic pressures at home ? Rosneft may have to eat the $800m that is still left owing ? quite possibly not an outcome contemplated by Russia when it blew up OPEC+.

With the current loss-making operations of PDVSA providing no income to the Government, leading to rampant inflation and a debt to GDP ratio that has dramatically worsened over the last month (currently estimated to be over 4,000%), Maduro?s grip on power can only be currently hanging by a thread ? each day the oil price war continues is another day closer to breaking point. Ironically, the actions of Venezuela?s staunchest ally in commencing an all-out global oil price war, could achieve what Trump?s sanctions and Guaido?s failed take-over has been unable so far unable ? the end of the Maduro regime.

But, might we also see the world turn and witness the possibility that the US may be forced to face the unpalatable situation of having to carry Maduro for a few more rounds? Regime change would surely lead to immediate sanction removal ? and to get the country back on its feet the oil production would need to be increased ASAP – which would risk a flood of new oil volumes hitting the market right at the worst time.

By Mitchell McGeorge for Oilprice.com