The end-game for Libya’s oil crescent 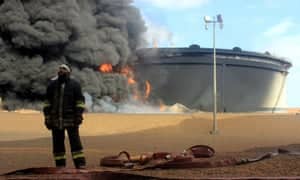 The end-game for Libya’s oil crescent

Libyan officials have stated that the control of the El Sharara oilfield has been handed over by LNA forces to Libyan oil security forces, the state controlled oil guards.

Even though Libya?s national oil company NOC is based in Tripoli, which is in the hands of Western and UN-backed Libyan government or Government of National Accord (GNA), the majority of the country?s oil fields are under control of Libya?s General Haftar?s LNA forces. The latter have taken control last week of the field, after negotiating a deal with petroleum guards and local tribes, who had closed down operations at the 315,000 bpd field.

Libya?s NOC already had put in place a force majeure, causing operations to stop until a new security arrangement comes into place. Until now, it is not clear if NOC has agreed to a new security arrangement with Haftar?s LNA, even now the latter has offered to support renewed operations. Naji Al Maghrabi, the eastern-based commander of the state oil guards, has called upon NOC to lift the force majeure. NOC also reiterated that without security arrangements in place, no resumption can be expected soon. An inspection team has been sent to assess security situation on site. However, the LNA and its militias maintain a no-fly zone, which points a potentially high threat level.

Looking at the ongoing military and political conflict between the UN-backed Tripoli government and Haftar?s Eastern Province government, a deal is not yet to be expected soon. Since months, Haftar?s LNA has been aggressively gaining the upper hand in the Libyan conflict, making the full control of Libya?s oil and gas fields a top priority in a move to quell the financial strength of the Tripoli government. The restart of production at the El Sharara field could take longer than expected, as a new military confrontation between Haftar?s allies and Tripoli cannot be ruled out.

The threat of a renewed LNA move to remove still strong opposition in the west of the country is growing. International concerns, however, have until now prevented a full-blown military attack on Tripoli and its government. UN envoy to Libya Ghassan Salame openly stated, in a meeting with East Libyan parliament Speaker Aguila Saleh that there is a need to end the deadlock. At the same time, Haftar has been meeting with Italian officials to increase Rome?s support for the LNA approach. In Tripoli, GNA head Fayez al-Sarraj met with High Council of State chief Khaled al-Mishri, the latter just returned from meetings in Washington. Despite the fact that the GNA still has support from the US, UN and several EU countries, Haftar?s LNA clearly has the upperhand. LNA spokesman Ahmed Al Mismari stated that the GNA is in a real crisis. Other LNA commanders even have vowed that Tripoli would be liberated soon.

Analysts expect Haftar?s military push into the south of the country, officially to remove ?terrorist and foreign fighters? from the area, to be the prequel for a major offensive into GNA territory in the coming months. This would for sure end the possibility of a nationwide Libyan election, which is still on the agenda of UN-backed groups. Until now, we have not experienced a complete military escalation as northern LNA forces have refrained from attacks.

Worrying however are the movements reported by third parties in the Libyan crisis. Several reports show that Turkey and Qatar have stepped up their efforts to support militias, while Haftar?s position is getting stronger due to open support of Egypt, Russia and the UAE. While no hard evidence has emerged of real military support by the Cairo-UAE alliance, videos have emerged of presumed Egyptian soldiers and military hardware operating inside of Libya. It is however clear that Haftar can rely on full Egyptian military support and intelligence. The UAE is also very active as a supporter of the LNA groups. Both Cairo and Abu Dhabi are supporting Haftar as a bulwark against Muslim Brotherhood led groups on the GNA Tripoli government side. They also are interested to remove any Turkish and Qatari power in a future Libya, as Ankara and Doha have been supporting Muslim Brotherhood groups in the region since the Arabic Spring. Tripoli may have support from the UN, Washington and Brussels, its future doesn?t seem bright.

Haftar?s coalition has been able not only to strengthen its control of a vast part of Libya, but also has set up very strong military alliance with Cairo, Abu Dhabi, Moscow and even Italy. Backed by these forces, Haftar?s dream to clean up western Libya could soon become reality. Russia and Egypt are more than willing to increase their military and financial support, trying to strengthen their own foothold in Libya and open up future investment projects too. Egypt?s oil and gas services companies already are vying for positions in the expected oil and gas Eldorado when the conflict is ended. Moscow?s approach is still diffuse, as it still has reasonably good relations with El Serraj?s GNA.

Haftar at present doesn?t seem to be interested in any national reconciliation conference or holding national elections. The current strategy is clear, removing the opposition bit by bit, while taking control of the main revenue source of the country, Libya?s oil and gas fields. The impotence of the GNA government militarily and financially will be seen as an opportunity to deliver the final hit. Most Arab countries, with the exception maybe of Qatar, are willing to put their support behind Haftar. Egypt and Russia have a lot to gain by having a strongman in Libya again. Cairo is looking for investment opportunities and security, while Moscow wants to have renewed access for its military and navy, to strengthen its Mediterranean position further.

Libya?s oil sector is the prime target for most, but at present a High Noon scenario between the LNA and the GNA will prevent a quick rebound in oil production volumes.