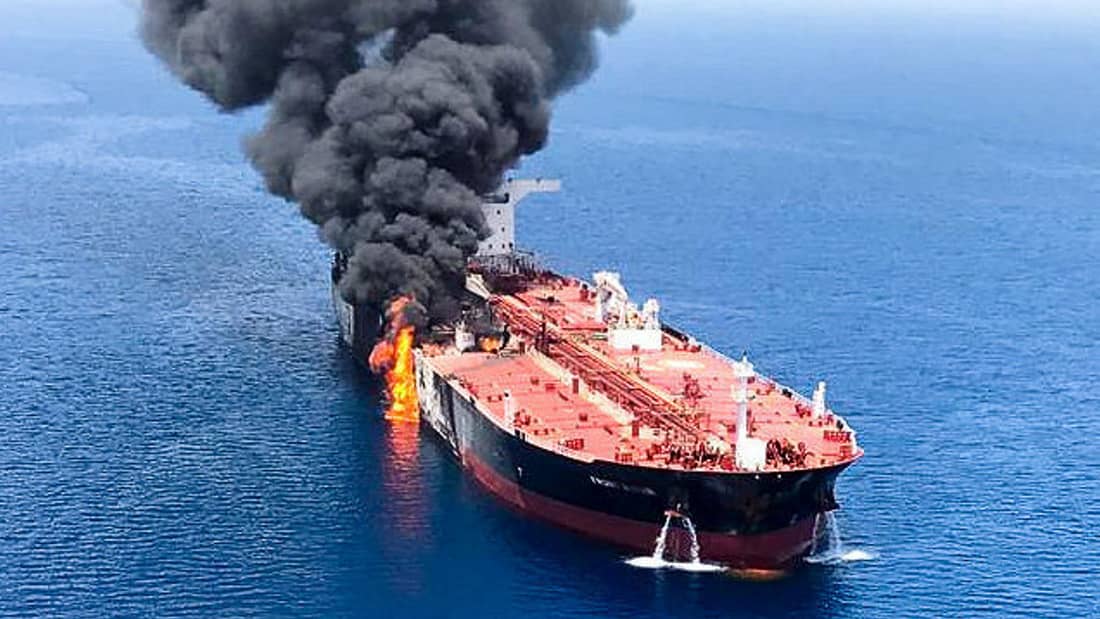 An attack by an unknown party on two oil tankers in the Gulf of Oman has put the Arabian/Persian Gulf region on edge.

After the possible Iranian attack on three vessels offshore the Emirati port of Fujairah last month, the current attack could be setting the scene for a direct military confrontation. Two tankers, the Front Altair and the Kokuka Courageous, both filled with petroleum and chemical products, such as methanol, were ?suspected to be hit by a torpedo?. This statement was made by Taiwanese company KPC and Front Altair?s owner, Norwegian company Frontline and has also been confirmed by the operator of the Kokua Courageous, Bernard Schulte Shipmanagement, which claimed that the ship was damaged in a “suspected attack.”

The last hours, search and rescue operations have been performed by the US, Iran and others. No direct accusations have been made at present, but indicators point to Iran or Iranian proxies, even as Tehran already has denied any involvement.

The oil market is in a state of shock, and many analysts weren?t expecting an increased military escalation between Iran and its Arab neighbors. After the Fujairah attacks, tensions have eased somewhat, but today?s attacks could end the status quo in the Strait of Hormuz.

After two weeks of media frenzy that the bulls have left the market and that OPEC is struggling to quell the negative sentiment in the market, a new reality could be here very soon. Oil prices surged today, incorporating the increased risk of a regional confrontation that could be threatening the majority of oil and gas supplies heading to Asia.

This time, the targets have been chosen very well, as they don?t involve Saudi or Emirate vessels, but Western tankers filled with petroleum products, such as methanol. Based on current information, the involvement of torpedoes, which suggests a high level of planning by sophisticated culprits, could lead to a military escalation in the ongoing US/Arab-Iranian confrontation. If it?s true that the Kokuka Courageous has been hit twice within three hours, it means that the attack is most probably conducted by a submarine or by under-the-radar moving assets, which points at the involvement of a state-level party, and not a proxy in the region. The US Navy?s 5th Fleet, which is patrolling in and around the Gulf region, has already reacted to the attack, as officials stated.

As the heat is on right now, analysts should start to reassess their current oil market predictions, as geopolitics and regional power struggles have returned to determine the market and oil prices for the foreseeable future. The current price slump, which currently dominates the headlines is focusing only at threats to demand growth, which have not yet materialized, yet little is being written about the ongoing struggle on the supply side to produce the right qualities and volumes the market needs.

While some have realized that the price slump was an overreaction, the geopolitical risk premium was put on the backburner, as many didn?t expect a serious escalation. It now seems that the main OPEC parties, Saudi Arabia, UAE, Iran and others, have their own view of the world. A future offshore conflict will not be fought in the Arabian/Persian Gulf but in new waters. The Gulf of Oman, leading to the Strait of Hormuz, or the Bab El Mandab now seems a more feasible theater of war.

The timing of the attack today also could be out of a military strategy playbook. While OPEC+ is struggling even to decide on a day to meet to discuss the potential roll-over of the existing production cut agreement, Iran threatens to effectively render the JCPOA agreement void. The current tanker attack shows the willingness of a party involved to put exponential pressure to force a breakthrough.

If Iran is the culprit the situation can be expected to escalate very soon. Don?t expect any lenience from Riyadh or Abu Dhabi, as both are already at crash course with Tehran with regards to OPEC strategies, market share and the so-called Shi?a bridge in the Middle East. The current escalation is a situation that entails a doomsday scenario, not only for the region, but also for OPEC?s internal structure. If Iran was actually involved, its position inside of OPEC will significantly deteriorate as no party will be willing to even show any inclination to take an objective or positive view on Iran?s dire situation at present. This attack could become also the litmus test of the Saudi-Russian bromance. If Iran is involved, Moscow will have to put its cards on the table and choose.

Without a serious in fundamentals or a solution to the US-China trade war, the oil market has changed. Geopolitics matter, especially in the current market situation. Demand is still there, and a serious decline still has to materialize. Supply threats, however, are back again, and not US shale, but conventional regional power politics will dominate the headlines.