Oil markets on edge as military clash looms in Libya 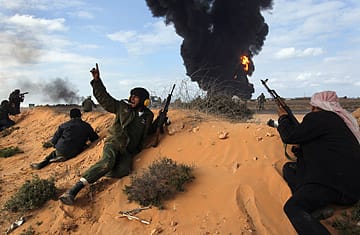 Oil markets on edge as military clash looms in Libya

Libya is heading for a military showdown as East Libyan strongman General Haftar has initiated a full confrontation with the UN-backed West-Libyan GNA Al Serraj government, based in Tripoli. After prolonged military operations in Eastern and Southern Libya, Haftar?s forces and militant groups, all combined under the LNA (Libyan National Army) are now heading to Libya?s former capital Tripoli. For months, the LNA has experienced success after success, removing not only extremist Islamic terrorist groups hiding in remote regions of Libya but also taking full control of most the country?s only real revenue generator, its oil and gas fields. Haftar has been long been preparing for this last showdown in Tripoli.

Backed by several Arab countries, such as Egypt and the UAE, with tacit support (both military and political) from Russia, Haftar gave the order to take Tripoli on Wednesday. LNA troops have taken several major cities around Tripoli, encircling Libya?s capital. The international community, led by the UN, is feverishly trying to quell the risk of a full-scale military confrontation between the two parties, with the scheduled elections now having been cancelled. France, Italy, the UK and even Russia have stated that a military solution is to the crisis in Libya is out of the question. The leader of the GNA, Al Serraj, officially backed by the UN and Western countries, can only rely on military support from the Misrata militias, Turkey and Qatar.

Looking at the situation on the ground, it appears that Haftar is paying little attention to these calls from the UN. LNA forces are close to Tripoli, preparing for a possible full-scale attack, with some news agencies reporting that some LNA operations have been pushed back by GNA loyalists.

In the coming hours and days the future of Libya may well be decided. Taking into account the overall military situation, it seems clear that Haftar?s LNA will be able to take Tripoli by force if needed, but it remains unclear what would happen after such an operation. The role of Haftar as a potential strongman or leader of a new Libya will depend not on his military strength but increasingly in the coming months on the deals he is able to make with several other tribes and strongmen in the country. Some even argue that Haftar?s encirclement of Tripoli at present is not a military move but a political one to put pressure on the Al Serraj GNA government to take a step back. Strategically, that move makes a lot of sense as the UN is still preparing to hold a conference later this month in the southwestern city of Ghadames to discuss a political solution to prepare for long-delayed elections and avoid a military showdown. With this in mind, Haftar has urged his forces to enter Tripoli without using force.

While his move may have surprised some analysts and the UN, Haftar?s move is one that we have been pointing to for weeks. In recent weeks, the LNA has taken over and secured Libya?s main oil and gas infrastructure and ports, while sending troops to the south to remove the remaining pockets of Daesh, Al Qaida and foreign operators and smugglers. By securing the main revenue generators of the Libyan economy, Haftar has not only gotten the attention of international governments and investors, but he is also now able to pay for loyalty and services from the remaining tribes and militant groups. The growing attractiveness of the LNA as the main power broker in the country has already diminished support for the GNA government and militants in and around Tripoli. For now, the GNA continues to hold its positions in Tripoli and Misrata.

The threat of a renewed bloody civil war in the western region however, does not only emanate from the tensions between the GNA government and Haftar?s LNA military powers. Libya, after the forceful removal of former dictator Muammar Ghaddafi by the West, has become a dangerous mix of regional and international actors, all positioning themselves to take a piece of the cake (oil and gas) in the future. It has been a very long road for General Haftar to gain the upper hand in this geopolitical game of thrones. He has been able to secure major economic and military support deals with Egypt, the UAE and Russia. At present, Arab, Russian and European corporations and governments are weighing their options and deciding upon how they can best position themselves in the Libyan power struggle.

The Al Serraj government (GNA) is still being backed by the UN, EU and some Western countries. However, without strong support from Turkey and Qatar, Tripoli would have been on its knees long ago. The Libyan internal conflict is an extension of the Saudi-Egypt-UAE vs Turkey-Qatar conflict.

One unpredictable factor in this power struggle is Moscow. While Russia has been openly courting Haftar, who has been a regular visitor and prominent guest in Moscow, Russian official statements call for a diplomatic solution. Kremlin spokesman Peskov reiterated that ?the most important thing is that military operations there do not lead to bloodshed?. The official standpoint of Haftar?s other key supporter, the UAE, is also to ?show restrain?.

At present it is not clear which strategy Haftar is going to pursue. A full, but prolonged, conflict with the GNA in Tripoli is unlikely. Supply lines and the current support of LNA aligned militias will come under pressure if the battle takes too long. While Haftar holds the power over almost all of Libya?s oil and gas infrastructure, he still doesn?t have power over Libya?s National Oil Corporation (NOC) or the Central Bank, where all export revenues flow. Another factor to consider is that a prolonged conflict would stretch Haftar?s forces, leaving him vulnerable to possible adversaries in the east, his current power base.

The Libyan situation, regardless of how it develops, will generate additional bullish sentiment for oil markets. The possibility of a military conflict, which could spread to LNA held oil and gas regions, Libya?s overall production and export capacity will take a hit. OPEC?s production cut strategy will be even more effective if additional Libyan volumes are taken out of the market. As global oil demand is still growing, supply issues will be increasingly bullish. Haftar has once again made the oil markets sit up and watch.

When looking at the looming crisis in Algeria, Libya?s neighbor, one could argue that a Haftar victory in Libya could be a blessing in disguise for the oil market. A strong leader controlling Libya after 5 years of turmoil would likely stabilize oil flow from the country and calm markets.

By Dr. Cyril Widershoven for Oilprice.com