Middle East oil giants are about to upend oil trading 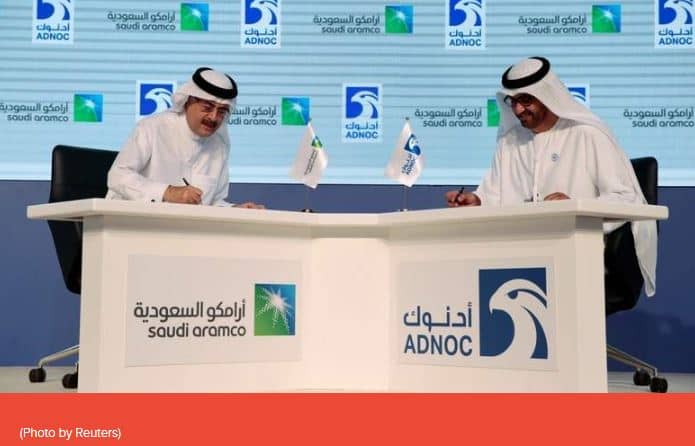 Middle East oil giants are about to upend oil trading

The summer of 2019 could be a watershed moment in global commodity markets. The next couple of months, could see a major reshuffle of global commodity trade and financial markets as a structured Arab strategy is kicking in.

International media has slowly started to report on the ongoing new ventures of oil and gas giants, such as Aramco and ADNOC, with international trading houses and IOCs making a move to capture a larger part of the global commodity market. The current assessments still tend to look at the attempts by Aramco, ADNOC, QP and Sonatrach, as mere minor disturbance and not a cause to worry. The current market power of giants such as Glencore, Trafigura, Vitol, Mercuria, Dreyfus or Gunvor, is still unmatched, but partly substituted by IOCs such as Shell, Exxon, Total, ENI or Gazprom.

Now NOC is even in the top-20 league of these hydrocarbon commodity trading giants. For decades, traders and IOCs have been ruling the sector, taking risks and high profits while the NOCs have been out of the game. This trend is slowly changing, looking at the reported new trading deals between Aramco, ADNOC and others. Drilling down the value chain has been common practice for NOCs in the last couple of years, one example of this are the global downstream investments of NOCs. Locking in their own consumer markets has become spearhead in NOC strategies.

OPEC?s leaders Saudi Arabia and UAE however have stepped up their effort to capture more dollars per barrel via a full integration of the value chain.

The combination of upstream, mid- and downstream is a winning business model as IOCs have proven already decades ago. Integrating the most risky but also profitable part of the business, commodity trading, has now become a priority for NOCs. The reach of their current trading arms is still not yet very large, but this could all be about to change. By setting up full-fledged trading departments, Aramco and ADNOC are openly taking on the conventional commodity traders. The Vitol?s and Trafigura?s of this world should now become very aware of the looming tsunami that is building up quick. The changes currently occurring in Dhahran, Abu Dhabi or even several North African countries, such as Algeria, will be much stronger than most trading giants currently expect.? Simon & Garfunkel?s ?Times are Changing? is very applicable, as these NOC power houses are not going to be satisfied by taking a tiny piece of the market. Their goal most probably is to shakedown the sector, removing most of the dead weight, that has been surviving due to a lack of competition, while at the same time restructuring hydrocarbon trading into a national or global (OPEC+) trading adventure.

Looking at the developments at Aramco, ADNOC and Sonatrach, there is still a lot of room for improvement, but all of them have a big advantage over the likes of Vitol and Trafigura.

NOCs own their oil and gas.

Without having to deal with standard operational practices such as tenders or other bureaucratic issues, NOC trading departments will have full access to production volumes, or petrochemical products of their own company, having a direct advantage to third parties in price, knowledge and insight.

By entering the commodity trading space, NOCs also will increase their own power over oil prices and supply issues. Giants such as ADNOC or Aramco will be able to squeeze a higher value from their own production than currently is the case.

Commodity traders will not only be confronted by NOCs entering the market with their own crude and product volumes. MENA NOCs already suggested that there will be no limits to their global trading involvement. By combining inside and outside knowledge, a full-fledged trading strategy could not only remove weaker traders from the market, but could also create a power house of unprecedented proportions if Aramco and its peers would buy out trading houses or set up global alliances with IOCs. Such an adventure is nothing new, and some examples of these are ADNOC?s trading JV with Italian oil major ENI and Austrian OMV, or Aramco entering Poland (and the Baltic) with a PKN Orlen JV.

After decades of global crude oil supply dominance, OPEC members have seen the light. To become an integrated international national oil company (IINOC) it is necessary and rational to take on commodity trades at the same time. To leave part of the business to third party commodity power houses has cost OPEC dearly, or took out some of the market powers of the producers.

From a geopolitical point of view the NOC commodity trading move is also clear. To be able to supply and control trade flows increases the power of NOCs but also of its national government in light of regional or global alliances. It also gives Aramco and its compatriots the opportunity to enter the market itself when it needs to source crude grades from third parties, not available on its own market. At the same time, both leading NOCs already have shown their appetite for global gas markets too, addressing LNG trade and products on a global scale. Others will also be stepping in, such as still fledgling Iraq?s SOMO trading or possible new Egyptian or Libyan ventures.

Commodity houses should be very worried, as the current hydrocarbon focus of these NOCs is going to be form other trading options too. MENA countries, heavily depended on agriculture and livestock imports, while producing vast volumes of minerals and metals, will follow these practices and set up trading houses very soon too.

What still misses for a real NOC commodity trading hegemony is an important and flexible commodity price point. Even though the Dubai Mercantile Exchange is trying to set this up, most of MENA crudes and other commodities are priced in Rotterdam or Singapore. This is partly due to the interest of the current commodity power houses. The majority of them is based in and around Rotterdam (NL), Singapore or landlocked Switzerland. A new commodity hub in MENA, most probably Saudi Arabia or offshore, would be a life-threatening event for conventional commodity traders. Combining hydrocarbons, metals and agriculture/food trading volumes, with a price point in the MENA region, would cause an earthquake that could reshape global trade patterns. It would fit into national strategies such as Saudi Vision 2030, which is linked to and supported by Abu Dhabi already. Commodity power houses should shouldn?t be taking these warning signs lightly, it is not just business, it is a national strategy.