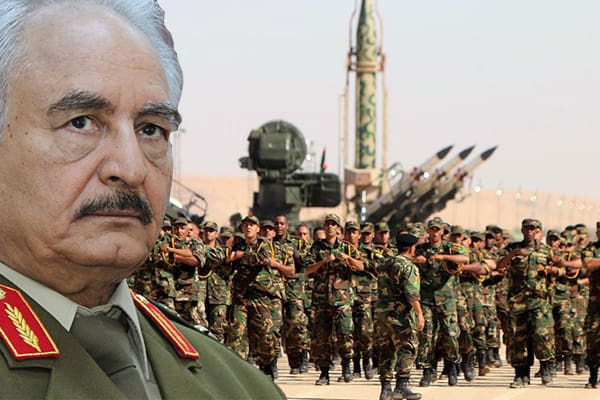 General Khalifa Haftar and the Libya National Army (LNA) is edging ever closer to a military victory in the civil war even as world powers push the warring parties towards peace.

Haftar, the 76-year-old leader who has vowed to remove the extremist militias from power and unify the war-torn country, played a masterstroke in blocking off oil production last week. In one stroke, he cut off the main source of revenue to his enemies in the Government of National Accord (GNA) in Tripoli led by Prime Minister Fayez al-Sarraj.

Haftar?s forces have almost total control over the vast oil and gas reserves in the country. Until now, the revenues from these operations were flowing into the coffers of the embattled government in Tripoli, which is recognized by the UN and backed by a plethora of militia including extremist groups linked to al-Qaeda and the Muslim Brotherhood.

In a desperate move to hold onto power, the Government of National Accord (GNA) signed in November an illegal annexation agreement to modify sea borders between the two countries, giving Ankara ownership of gas fields in that area. Turkey also decided to send hundreds of mercenaries from Syria to fight against Haftar?s forces as they advance on the capital.

The Berlin summit, which included representatives from all sides in the conflict and several international observers, ended with a call on both sides to de-escalate, paving the way for a permanent ceasefire, and to abide by the arms embargo put forth by the United Nations Security Council in 2011.

However, the conference and its nine-page conclusion were mere political theatre, with each country vying to protect its interests. It is unlikely that either Libyan party will back down or stop seeking military support to fight its corner.

A major military conflict is brewing. The call for a much stricter arms-embargo, restricting or blocking military supplies to the GNA or LNA, should be taken with a truckload of salt. Even during the conference official statements and meetings, military clashes and bombardments continued in and around Tripoli and other areas in the country. Haftar and al-Sarraj are not looking for a status-quo, but military victory.

Ideas about power-sharing agreements or ceasefires might please Western ears, but Libya?s power players have their own objectives embedded clearly into a military strategy. Haftar?s LNA, which is backed by Egypt and the UAE and also gets support from Russia, France and others, is heading for all-out victory, uniting the country again under one rule. The Turkish-backed GNA is heading for a defeat, even if Ankara puts its military weight behind it.

Ankara?s main constraint at present is that no North African or European country supports any Turkish involvement in the conflict. Ankara?s ongoing conflict with its neighbors in the Eastern Mediterranean is pushing France, Greece and Italy to side with Haftar.

Turkey?s illegal agreement with Tripoli and its mobilization of forces to Libya have further alienated Ankara, which plays host to the Muslim Brotherhood and has already distanced itself from the NATO by installing Russian missile defense systems.

The only glimmer of light after Berlin is that Greece appears to be taking a more flexible position. Before the weekend, Athens threatened to veto any European agreement on Libya, as they were not invited to attend the Berlin conference while Turkey was prominently at the table.

The Greek Prime Minister?s office stated to the press it was a ?positive step? that the conference affirmed the need for a political solution and that all sides agreed to maintain an arms embargo.

Still, a major escalation is still the most likely option, as the Berlin conference has not discussed the bilateral agreements between the GNA government of Libya and Turkey delineation of maritime borders in the Mediterranean.

Even with Ankara?s military might behind al-Sarraj, Haftar is most likely to emerge victorious through military confrontation, leaving plans for a peaceful power-sharing agreement in tatters.