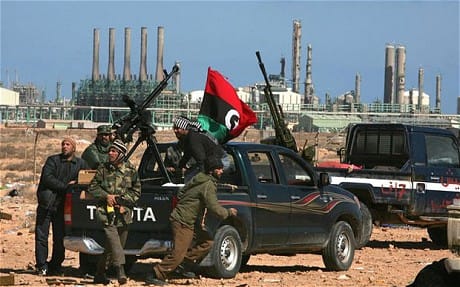 Libya?s National Oil Company NOC has once again shocked the oil market by officially declaring force majeure on its operations at the El Sharara oilfield, the largest oilfield in the country. After months of continued optimism in the media and political statements coming out of Paris and Rome about a possible peace deal between the two competing governments, led by Libyan general Haftar and his counterpart El Serraj, the situation on the ground is looking even worse than before. The eagerly awaited oil production increase from Libya, which could supposedly mitigate the effects of falling production from Iran and Venezuela, now seems unlikely to happen. NOC officials stated that the production of the 315,000 bpd field, which is located in the south of Libya, has been blocked by protestors and militias in the area. A group of tribes, armed protestors and guards took over the field on December 8, asking for salary payments and additional financing. Until now, Libyan government officials have been unable to quell the protests. NOC officials have reiterated that the financial demands will not be met, as this could set a precedent for other oil and gas operations in the country.

It is still unclear who the real culprits behind the current blockade and seizure of the field are as sources are blaming different groups or militias. NOC claims that the field has been taken over by a militia that is reportedly trying to get on the payroll of the field guards. No indication at present can be given as to when the field will come back onstream. NOC?s chairman Mustafa Sanallah has called for the force majeure in a move to provide security to the workers at the field.

In recent weeks, several other fields have also been occupied, blocked or taken over ? but production has not been significantly impacted at those fields. Tribal representatives and several militias have indicated to the press that the current blockade is a protest against marginalization and shortages of electricity, fuel and money.

It is the UN-EU backed Libyan government GNA that is feeling the brunt of the pain from these protests. The militias and tribal groups are currently targeting GNA operations as the Tripoli-based government has been accused of marginalizing the southerners.

Libya?s oil and gas fields and infrastructure, including the export ports, such as Zawya, have been the main targets in the ongoing civil war between the two competing governments after the removal of Libyan leader Muammar Ghadaffi. At the same time, several major extremist fundamentalist groups, such as Daesh/ISIS and AL Qaeda are also very active in parts of the country. For months, the power struggle between the GNA and the forces of General Haftar has been concentrated around Libya?s main economic artery, its oil and gas fields. Haftar, supported by Egypt, Saudi Arabia, the UAE and Russia, appears to be winning this struggle, slowly but steadily taking over more of the country.

In addition to the force majeure at the oilfield, security forces in Libya?s Tobruk Port said to the press that the port was closed indefinitely for security concerns, a statement that was followed by gunmen storming the port on Sunday. In October 2017 the port was closed for a long period due to pressure from General Haftar?s so-called Dignity Operation.

Overall, Libya?s political and oil future is a shambles. Even after high-level meetings in Paris and Rome, where the French and Italian government tried to set up their own security and governmental arrangements between the fighting factions, the is no end in sight to the fighting on the ground. Currently, another round of violence is brewing in and around Tripoli, where several militias are looking to expand their control over parts of the city, weakening the power of the Western-backed Government of National Accord (GNA). Since a brokered ceasefire in September, most militias have been pulling back, but the tensions at present point to a willingness for a new round of conflict. The UN-GNA approach to either include the militias in security forces or demobilize them is under pressure. Still, some hope remains, as analysts indicate that militia leaders are willing to cooperate, largely in a move to protect their (illegal) income. Stability – in the end – will depend on the willingness of the GNA forces to put their foot down if needed.

Even if the Tripoli situation can be resolved, the future depends largely on General Haftar. Haftar is looking for any opportunity to expand his powers to the western parts of Libya, having already secured most of the east. Haftar still openly pushes his pledge to ?liberate? Tripoli by forging alliances in the west. Arab countries, such as the UAE and Egypt, are supporting Haftar to make a deal with western Libyan militias to stabilize the whole country. NATO-member Italy has also shown a preference for the Haftar option, especially after Moscow openly stated its support of the Libyan general.

Even French president Macron pushed the position of Haftar during the Paris meeting of the GNA and Haftar militias. In Paris Haftar and his counterpart Al Serraj agreed to a ceasefire and Spring elections, but the general declared hours later that he has no intention of sticking to that agreement. Past attempts to negotiate peace in Libya have been undone by splits within each faction, which are often made up of loose alliances of convenience among brigades of former rebels more loyal to cities, regions or tribes than to the idea of a Libyan nation. Haftar now seems to have the upper-hand, after partially defeating IS led militias and other extremists.

None of this bodes well for Libya?s oil operations. Haftar?s next moves towards Tripoli will almost certainly be a military operation to win all oil and gas fields that are currently under GNA influence. More actions and possible disruptions can be expected very soon.