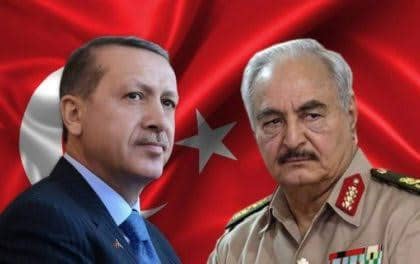 Libya?s oil operations have been dealt a blow during the last 24 hours, after local Libyan tribes, allies of Libya?s General Haftar?s LNA, disrupted production at the El Feel and Sharara fields and blocked the transportation of crude oil to the Zawiya export terminal.

Haftar?s allies acted while France, Italy, Germany, Russia, Turkey and several others gathered in Berlin to discuss a possible ceasefire between the Tripoli based and UN backed El Serraj government (GNA) and Haftar?s UAE-Egypt backed LNA.

The shut-ins at the El Feel and Sharara field are not the only outages in the country. The Tripoli based National Oil Corporation (NOC) recently declared a force majeure after the LNA blocked the exports from Brega, Ras Lanuf, Hariga, Zueitina and Sidra. The force majeure was called after the LNA ordered the units managing local production to halt exports via these ports. The closure of operations in the East of the country has taken out around 800,000 bpd. Taking into account all outages, only around 60,000 bpd of capacity will still be online, compared to the 1.23 million bpd the country produced in November. The LNA?s move was not entirely unexpected given the fact that forces loyal to General Haftar have taken control of the fields in recent months. The GNA has already warned that the current situation will bring down the economy, could result in an exchange rate collapse, and force an exodus of foreign oil companies. In Berlin, some GNA officials indirectly accused other oil-producing countries to be the main beneficiaries of the current situation. The GNA statement can be linked to the UAE-Saudi and Russian support of Haftar?s LNA.

Haftar?s move to increase pressure on the El Serraj?s GNA government is a major constraint for the fledgling agreement reached at the Berlin Conference this weekend. The outcome of the Berlin Conference on Libya this weekend has been as expected. Statements regarding the implementation of a cease-fire, full blockade on arms deliveries and a so-called 5+5 council set up by GNA and LNA are seen as a step forward by Western observers. The reality on the ground is however totally different. The crisis keeps on escalating, as most real power players in the Libyan conundrum are not interested in changing their strategies. Haftar?s backers are very concerned about the sudden expansion of Turkey?s military engagement in Libya. The support by Ankara for the weakened UN-recognized Tripoli based El Serraj led government (GNA) has put especially Egypt, UAE and several European powers in the corner of Haftar. North African countries, such as Egypt or Algeria will not allow Turkey to gain a military or economic foothold in Libya. By threatening the GNA?s life-blood, oil and gas revenues, Haftar?s backers have now upped the ante again. Indirectly, Cairo, Abu Dhabi and even Moscow aren?t happy to see that the GNA-Turkey axis is building out its position using hydrocarbon revenues.

The Libyan situation is further complicated by recent developments in the East Mediterranean. The region has been on edge since the GNA (Tripoli) and Turkey signed an illegal Turkish-Libyan Economic Exclusion Zone (EEZ) agreement, that splits the East Mediterranean area in two, effectively blocking the efforts of the East Mediterranean Gas Forum (EMGF), the alliance between Egypt, Israel, Greece and Cyprus, which has been put in place to strengthen their economic-political and military cooperation. The growing eagerness of France and Italy to get into the EMGF, and the growing military cooperation, especially between the navies of aforementioned countries is likely to provoke a response from Ankara.

The Berlin conference is unlikely to yield any result. Two major conflicts are brewing, with Turkey as the main instigator. The East Med and Libyan conflicts are linked. Without resolving one of them, the outcome of each of them will have a major impact on the global oil and gas sector. The impact of Libya?s oil outages on global markets are relatively small, but a protracted supply disruption would surely affect the price of crude. An open conflict, affecting not just Libyan oil, but potentially also oil shipping and or gas infrastructure could cause serious trouble for Europe. Instability in the backyard of the 2nd largest economic power bloc in the world does not bode well for global energy demand.