Is the Saudi – US alliance at a tipping point?

Berry Group / Energy  / Is the Saudi – US alliance at a tipping point? 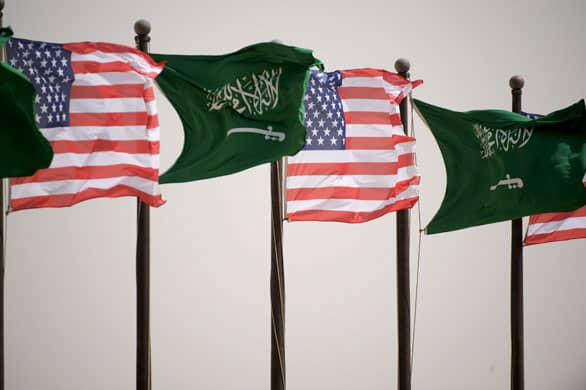 Is the Saudi – US alliance at a tipping point?

The disappearance of Jamal Khashoggi is threatening the close relationship between Washington and Riyadh.

The government of Saudi Arabia has denied any knowledge of or involvement in the reported killing of Saudi journalist Jamal Khashoggi by Saudi security officials. Statements by U.S. President Trump that the consequences would be severe if it is revealed that high ranking Saudi officials or even members of the royal family were involved were strongly rebuffed by the Kingdom.

Saudi official statements have warned that the Kingdom would act in extremis to protect its interests. Saudi rhetoric has since softened, but Riyadh has made clear that it won?t take any backlash lightly. Western media, politicians, and corporations are becoming increasingly worried about the potential fall-out of a real conflict between the U.S.-E.U. and Saudi Arabia. A possible conflict will harm not only international global economic growth but could lead to a shift in the geopolitical balance of power not seen since the?end of the 1980s.

In stark contrast to the reaction in the West, the rest of the world has largely remained silent. No substantive responses have emerged from major powers such as China, India, or Russia. At the same time, the Sunni Arab world is showing its full support for Saudi Arabia, pledging their full support for the Kingdom. The Khashoggi case already is no longer a solely Saudi issue. The Kingdom?s partners in the Gulf region; Egypt, the UAE, and others, have indicated their preparedness to stand alongside the Kingdom, and its Crown Prince Mohammed bin Salman in the face of mounting international pressure.

Sheikh Abdullah bin Zayed Al Nahyan, Foreign Minister of the UAE, has openly stated his country?s full support for Saudi Arabia against any attempts at damaging the Kingdom?s regional standing.?Even Oman, which has distanced itself from the Saudi-led anti-Iran coalition, has voiced support. A statement issued by Abdullatif Al Zayani, Secretary-General of the Gulf Cooperation Council, condemned the Western media?s reaction as an anti-Saudi campaign. A source from the Arab League General Secretariat voiced a complete rejection of economic threats as a means to achieve political gains, adding that Saudi authorities were fully cooperating with the ongoing investigations into Khashoggi?s disappearance.

It is dangerous to underestimate the severity of and fallout from a Saudi-led retaliation.

Forcing the Kingdom into a corner doesn?t leave Crown Prince bin Salman with many options. Possible economic sanctions or political pressure on Saudi Arabia, as suggested by President Trump, have been repudiated by Riyadh. Saudi officials even have openly stated that any such actions taken will be met by counter actions, which could include the use of the so-called ?oil-weapon,? a reference to the OPEC oil embargo in the 1970s, and a possibility that sent jitters through the global energy markets.

A unilateral move by Saudi Arabia to use its oil and other petroleum products as leverage against U.S. or European sanctions would result in an energy crisis, the likes of which haven?t been seen for years. A short-term reduction in oil exports to the U.S. and European markets would result in a severe price increase. The overall effects could even be more extensive if Saudi?s regional partners supported this move. Statements made by U.S. experts that non-Arab oil producers would be more than able to mitigate the adverse effects are unrealistic. To expect U.S., Canadian, Venezuelan, or even Russian oil to serve as a hedge against a possible Arab oil embargo is unrealistic.

Saudi Arabia has other instruments at its disposal.

Economic sanctions on Saudi Arabia could be countered by withdrawing Saudi investments in strategic sectors throughout the U.S. and Europe. Saudi Arabia?s PIF sovereign wealth fund has been actively investing?in Europe, the U.S., and Asia. The list is impressive, as the PIF targets high profile companies such as Uber, Tesla, and others. High profile investments of the PIF indicate part of the growing influence of the Kingdom globally. In addition to a range of oil-related projects, the PIF has invested in:

The fund has been aggressive in expanding its international holdings. New deals, such as the more than $1 billion investment in electric car start-up Lucid, the $2 billion stake in Elon Musk?s Tesla or the $70 billion sale of its stake in the world?s largest chemical producer Saudi Basic Industries Corp, are just a few of the Kingdom?s recent international ventures. The sovereign wealth fund has also increased its stake in ACWA Power, the country?s largest independent power-plant developer, to about 25 percent.

Saudi Arabia is also invested in a host of high profile European companies. These include Krups, Siemens, ArcelorMittal, and others. Hundreds of millions in dollars are being invested in real estate, especially in the United Kingdom, Germany, and a growing number of other E.U. states.?Concurrently, the Kingdom is strategically spending several hundred billion dollars in China, India, Pakistan, Ukraine, and Russia. In South Africa, the Kingdom is engaged in discussions with the defense firm Denel over a potential deal with Saudi state defense company Saudi Arabian Military Industries? (SAMI). The Saudi government seeks to develop its own domestic defense industry, and with the goal of localizing half of its military spending by 2030, more investments into defense-related projects are to be expected.

If statements published by Saudi newspaper Arab News serve as an indication of the nature of current discussions within the Saudi government, Riyadh has up 30 measures under consideration designed to put pressure on the U.S. if it were to impose sanctions. According to an opinion piece in Arab News, such measures include an oil production cut that could drive prices from around $80 to more than $400 per barrel (which, in reality, is next-to-impossible). Another potential option is to block the arms deals that US president Trump (officially) has been signed during Trump?s visit to Saudi Arabia. Riyadh indicated that thousands of jobs could be at stake in the U.S. if the $110 billion deal were delayed or even altered. The Kingdom is presently the world?s second largest arms importer, of which 61% comes from the U.S. In 2017, Saudi Arabia signed a $17.5 billion arms deal with the U.S. Companies presently at risk include Lockheed Martin, Boeing, General Electric and ExxonMobil.

Since the emergence of MBS as Crown Prince, Saudi Arabia has become one of the largest investors in Silicon Valley. After being largely focused on Wall Street companies, MBS has shown an appetite for high-tech and startups. The Saudi sovereign wealth fund has become one of Silicon Valley?s biggest swinging checkbooks. Main investments have been done via Japanese investment vehicle Softbank, mainly via a $100 billion fund Vision Fund, raised by the latter. The fund has already taken multibillion-dollar stakes in promising companies. PIF is presently considering making another $45 billion investment in Softbank?s Second Vision Fund. Major stakes are held in Uber (Saudi is the largest single stakeholder) but also in startups such as Wag, DoorDash, WeWork, Plenty, Cruise, Katerra, Nvidia, and Slack.

At the same time, the list of high profile Silicon Valley hotshots taking part in the Saudi Giga Projects, such as NEOM, is staggering. The pressure here is however growing. Due to the Khashoggi case, several have left their Saudi advisory positions. Former United States energy secretary, Ernest Moniz, and Sam Altman (Y Combinator) have suspended their involvement in NEOM in recent days. The impact of these moves is still unclear, but Arabs historically have long memories.?In contrast to these leaves, others, such as Marc Andreessen of the famed Silicon Valley investment firm Andreessen Horowitz; the former Uber CEO, Travis Kalanick; and the Boston Dynamics CEO, Marc Raibert, are still onboard in NEOM.

Saudi influence in Silicon Valley is even expected to increase substantially, looking at the list attending FII2018 in 1.5 weeks in Riyadh. Lucid Motors CTO., Peter Rawlinson; the Google Cloud CEO, Diane Greene; the Magic Leap chief product officer, Omar Khan; and Vinod Khosla of Khosla Ventures, are still on the speaker?s list. Looking at the Saudi investments, most of them will attend their largest financial beneficiary.

For the next couple of weeks, all eyes will be on Riyadh.

From a devil?s advocate point of view, Riyadh?s current problems on the global scene may be a blessing for some. As some media gurus are stating ?No new is bad news, any news is good news.? The potential emergence of a rift or even the appearance of one, between Saudi Arabia and the West will open the doors for more involvement with Russia, Ukraine, China, India, and others.

The position of Saudi Arabia, and possibly its GCC allies and Egypt, is changing dramatically. The global sway held by the U.S. and Europe has eroded since the end of the 1990s. The adverse effects of the 2nd Iraq War, the invasion of Afghanistan and a soft approach to geopolitical power play under the Obama administration has resulted in the current situation. A resurgent Russia, the quiet but dangerous military encroachment of China throughout the Middle East and North Africa, and an aggressive Turkey seeking to consolidate its regional influence has cemented the mindset of the Arab governments. For them, the Arab Spring and Western support of the Muslim Brotherhood?s so-called democratic opposition was the last straw. Economic and military threats on the Kingdom will not be taken face value.

A new Arab pride, based on realism, has emerged.?The current mindset of the Arab rulers, ?in Saudi Arabia, the UAE, and Egypt, is that they want their place at the table. After decades of having just one option for survival, Riyadh understands it now has options. A slap in the face by the U.S.-led West will not be taken lightly. Putin and other autocrats will be more than willing to step in to fill a void that could present itself the coming months.

For the U.S.. and the West, urgent decisions must be made. If Riyadh, Abu Dhabi, and Cairo choose to shift their geopolitical alignment, it will be for the long-term. The emergence of Asia and other rapidly-developing regions as future export markets, combined with the decreasing need in the West for Saudi oil are economic factors in this decision. Increased criticism from Saudi?s Western allies and the possibility of punishment will undoubtedly push the Kingdom and its regional partners to consider a political realignment seriously.

A dramatic change in geopolitical alliances will be costly for all parties. Instability will occur in the region, but also for the West. A significant realignment of interests will even threaten European and U.S. economic and military interests. Without allies in Riyadh or Cairo, the Middle East will be out of reach.