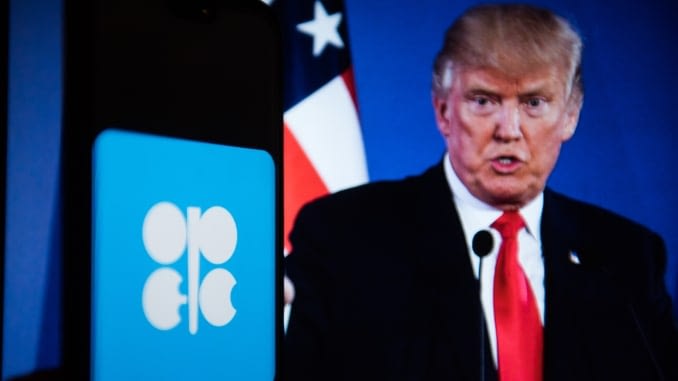 The ongoing turf war between U.S. president Donald Trump and OPEC+ where the oil market needs to be heading is again heating up.

With a barrage of accusations, Trump has resorted again to Twitter to call upon OPEC+ to reopen its valves and bring more crude on to the market to counter increasing prices. The reaction of OPEC+ has been muted, which goes to show that Saudi Arabia, Russia and the UAE are not at all inclined to answer Trump?s demands any longer. At the same time, the effects of Trump?s Twitter war with OPEC and Russia are also waning, as analysis is showing that the market reacts violently to a Trump tweet on OPEC but very quickly recovers to its old price levels. Trump?s anti-OPEC rhetoric is clearly losing importance and impact.

While OPEC and Russia (OPEC+) have decided not to convene before June 2019, the market is in flux. Reported statements that the oil market is still oversupplied, while worries about demand growth are increasing, are suddenly under scrutiny. Some analysts had already reported that the current assessments of the oil market, demand and supply or oil storage volumes, are not right, and new assessments now have confirmed that the overall rosy picture about US shale oil volumes and potential growth the next years could hit a wall. The last couple of days, news has emerged that the export of US shale oil has been hit by a major issue, as a growing list of Asian refineries have been reported to be refusing US shale oil due to contamination issues. Some U.S. articles have suggested that contamination occurred during transportation inside of the U.S.

At the same time, US financial black sheep, and leader of the financial oil analysts flock, Goldman Sachs has stated to its clients that the expected shale oil production growth, which was even reported month-by-month by the Energy Information Agency (EIA) of the US Department of Energy, will most likely be much less than is predicted at present.

In its report, Goldman Sachs stated that the overall US oil rig count has fallen to 11-month lows this year. This downtrend started in February of last year, and at present, the U.S. shale patch continues to shed oil rigs. The banking giant also stated that if the trend continues, it will be unlikely that U.S. shale production will rise above 13 million bpd in 2020.

The EIA two weeks ago increased 2019 production expectations to 12.3 million bpd. The agency still holds to the assessment than the U.S. will be outproducing Saudi and Russian combined production by 2025. This optimism is not shared by many analysts. Most doubt if current US oil production is sustainable, especially when taking into account that US shale operators have been investing less in drilling and operations, and more in value created for their shareholders. Cash has increasingly flowed into the pockets of the shareholders, while shale oil needs steep cash injections to sustain production. The fact that IOCs, such as Shell, ExxonMobil or Chevron, have feverishly entered shale oil, especially Permian, is currently seen as a positive development.

What many fail to understand is that these IOCs have only substituted their investments from conventional oil to unconventional. In reality, overall investments have declined, while at the same time, shale oil prospectivity and productivity is way lower than conventional oil production. Future supply crunches are to be expected if this development continues. The IOCs withdrawal from conventional oil can and will not be offset by NOCs at the same level. Total liquids output will come under pressure, while at the same time, crude quality, which is still not leading the overall discussion globally, could cause operational challenges for refineries.

OPEC+ can be renting some very nice summer holiday resorts, as IOCs and Trump are currently doing Riyadh and Moscow?s bidding. By withdrawing from conventional oil investments or by dedicating large chunks of the total budget to renewable energy and utility projects, IOCs are supporting Riyadh?s quest for higher oil prices. Trump?s international sanctions on Iran and Venezuela are doing the rest.

In the next couple of months, OPEC+ will have room to act according to their own strategic considerations. Market fundamentals are supporting Saudi Arabia for sure, as there is still a perceived oversupply in the market. Without putting pressure on demand for OPEC crude, market fundamentals will be positive. Especially when the majority of the market starts to understand that US oil storage figures are being influenced by a global lack of demand for US shale oil. If the latter is being taken out of all calculations, prices would already have spiked. Slowly but surely, Saudi?s energy strategists can start to relax. The U.S. shale patch is proving to the market that it can?t influence oil prices to the extent that OPEC can. There will be no flooding of the oil market, only unconventionals are stacking up. And this is likely to happen for a shorter period of time than agencies such as the EIA are reporting. The year 2019 will go into history as a year of ?undersupplied markets, while US storages will be full. The next OPEC+ meeting will be showing a much more relaxed atmosphere as the last ones. No need for new cuts, just support the current ?ceteris paribus? situation further. Maybe Khalid Al Falih should be starting to tweet to ?Always look on the Bright Side of Life?.