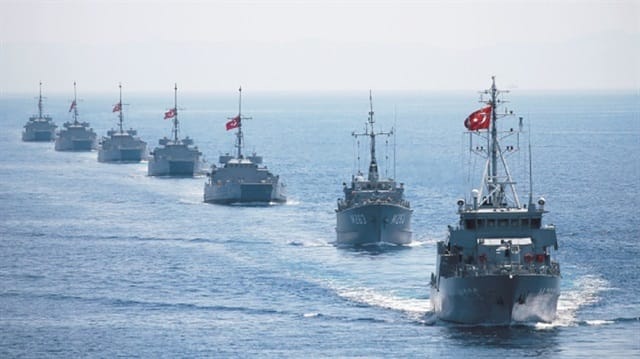 Even though the international community is apprehensive about the regional power projections of Turkey?s president Erdogan, now threatening a possible maritime conflict after he signed an EEZ agreement with the fledgeling Libyan government, the future of Cyprus energy sector is under pressure.

Optimistic statements by the East Med alliance, formed by Greece, Cyprus, Israel and Egypt, indicating that the deal for the so-called EastMed offshore gas pipeline will be signed on January 2, 2020, are at present to be taken with a truckload of salt.

The media adventures of Greek, Israeli and even Egyptian ministers indicating their full commitment to the integration of offshore East Med gas reserves, partly to be supplied to Europe via a very expensive and technically challenging deepwater offshore pipeline project, stand in stark contrast to the military and political reality on the ground.

Turkey?s president Erdogan has suddenly upped the ante by going for Turkish-Libyan military cooperation while blocking part of the East Med region due to the so-called Economic Exclusion Zone (EEZ) agreement between the two countries.

If this agreement is put into action, not only Turkey will be able to block part of the offshore pipeline project but will be heading for a full-scale confrontation with Greece, Cyprus and indirectly Egypt and Israel.

Ankara?s open support of the Libyan GNA government, which is still officially UN-backed, against the LNA military operation of Libyan General Haftar, who is the de facto power broker in the country and supported by Egypt, UAE, Saudi Arabia with France, Italy and even Russia, is not to be taken lightly.

Erdogan?s move to send over Turkish troops to assist the GNA will bring it into a confrontation at least with Egypt and Abu Dhabi. The latter two will not allow Turkish troops and proxies to take power in Libya.

At the same time, Erdogan is increasing pressure directly on Cyprus these last months.

After blocking and threatening international oil companies, such as ENI and Total, moving Turkish navy vessels into the Cypriot EEZ, Ankara now wants not only to base Turkish military drones on the occupied Turkish part of the island but build a naval base and a gas pipeline between the ?Turkish Republic of North Cyprus? and Turkey.

These illegal acts, as the ?TRNC?, is not recognised by any country, except Turkey, and the further militarization of the Cypriot conflict puts a huge dampener on the optimism about Cyprus offshore gas and even its current LNG import plans.

Taking a third party view, Cyprus and Turkey are heading for a new military confrontation, if no political solution is found very soon.

The US Congress annulation of the arms embargo on Cyprus, which was in place since the 1980s, will not be sufficient enough to counter a possible military operation by Turkish forces.

Washington?s pledge to support Cyprus in case of a conflict is a positive one, but as the English say, ?Proof is in the eating of the Pudding?.

Looking at Washington?s latest moves in the region, while also taking into account the lack of US action in the Persian Gulf, not a lot of hope should be put on direct US military interference or support in case of a renewed Cypriot conflict.

All signs are on red indicating that a new Cypriot conflict will not only be between Nicosia and Ankara.

The Turkish moves and aggressive military power projections in the region by Ankara have forced the other littoral states of the East Med to group together.

The large increase of military manoeuvres in and around Cyprus, supported by Egypt, Israel and Greece, should send a warning to Ankara.

Erdogan also should understand that his aggression against ENI, Total and even Libya, is forcing European countries to send their military to block Turkey?s approach.

If, however, Ankara?s bluff is called and some room for diplomatic moves is there, commercial parties will still be interested.

Continuation of the EastMed pipeline project is a positive sign showing that there is still major European interest to import gas in large volumes.

The signature of the deal in January should however not be seen as a real first step towards full implementation.

Too many commercial and technical risks need to be assessed before a Final Investment Decision (FID) is taken by all parties involved.

The available offshore reserves are for sure commercially interesting and will assist Europe to increase its security of energy supplies and diversification efforts.

The Cypriot government and main stakeholders should, however, reassess their overall options.

The current focus is unclear, as Nicosia is taking a dual-step approach. The first one, supported by the European Union and financial backers such as the EIB, is pushing for the offshore deepwater pipeline strategy.

As already indicated, the latter is a tricky and costly one, while having another major negative side.

By taking a full-scale multibillion-euro pipeline approach East Med, at least Cyprus and Israel would be locking in their supply to South-East Europe.

Demand for gas is very high, and will still be growing, but at the same time Russia, several FSU countries and even Iran/Iraq, are vying for the same bounty.

The EastMed pipeline would be directly competing with all Turkish-based pipeline projects, already a possible cause for conflict.

The second option is to explore and produce offshore gas which will be partly used locally, while the rest should be heading via pipeline to the existing Israeli-Egyptian infrastructure.

The latter option is commercially more attractive and strategically enhancing not only regional cooperation but will take advantage of the global LNG market opportunities.

The need for gas in Cyprus is clear, as energy demand is growing, currently met by environmentally unfriendly sources of energy.

By substituting the latter, utilising possible own reserves, and supplementing it with additional LNG imports in the short term, is the most applicable option.

The need for large-scale LNG options, as currently being implemented via the LNG FSRU contracts, however, should still be reassessed.

Small-scale LNG availability in the region (Egypt, Qatar, Algeria) could be sufficient enough and cost-attractive too.

The proposal of Greek oil company Energean to supply Israeli gas from the Karish North field is another viable option.

A relatively small gas pipeline could be built between the Energean field and Cyprus, needing less than $350 mln investment.

The coming weeks will be crucial for success in 2020. Commercial discussions and market analysis are only showing the upside, but regional geopolitics and power projections are now shaping the discussion.

Without a relatively stable environment in the area, no deal will become a reality. Paperwork will be done but other operations are already on hold or will be put on ice.

A looming regional military confrontation, either in Cyprus, offshore Greece-Cyprus or Libya, will blow out the candle of hope, as Erdogan?s breath is strong enough to end it.

By Dr. Cyril Widdershoven for FinancialMirror.com